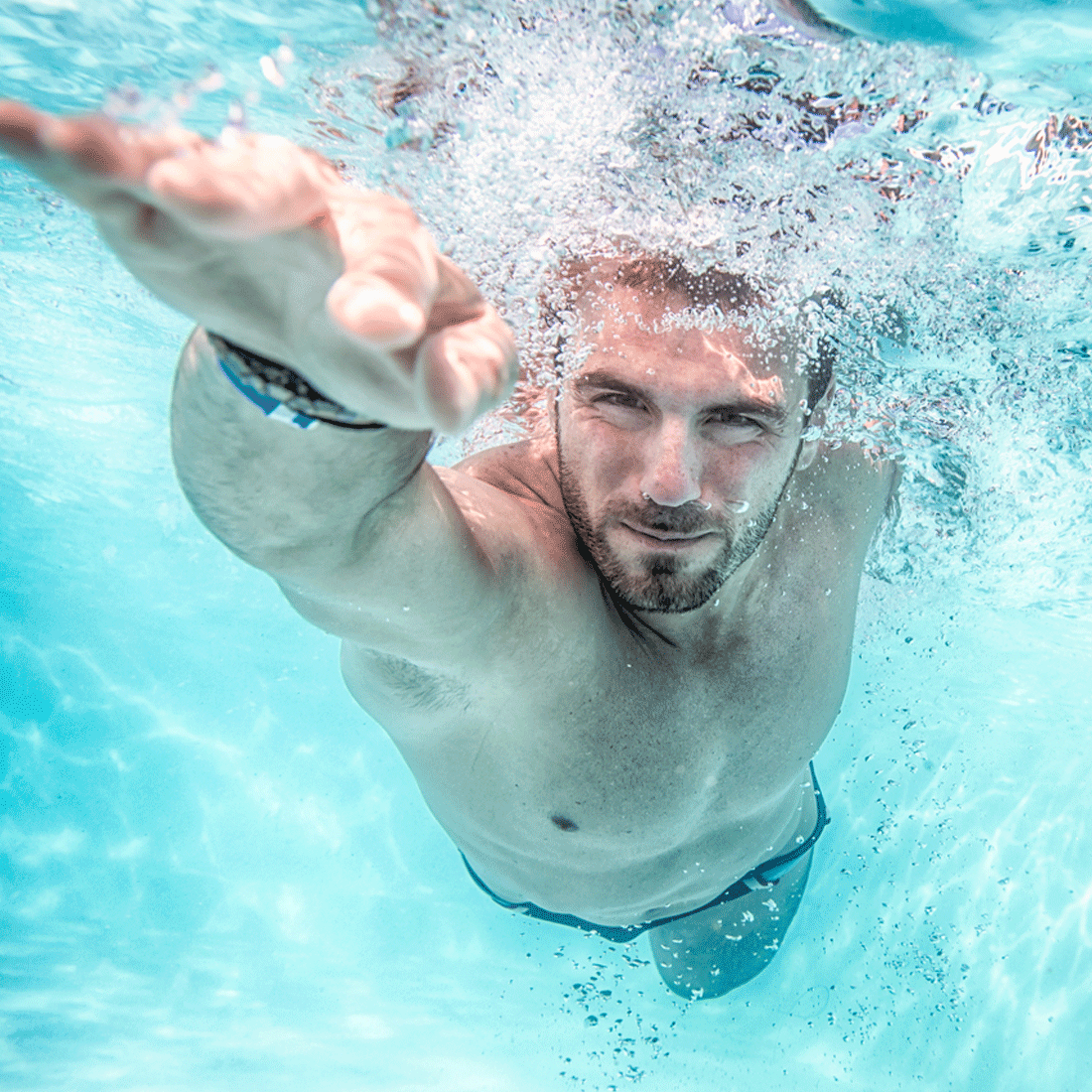 The front crawl or forward crawl is a swimming stroke usually regarded as the fastest of the four front primary strokes. As such, the front crawl stroke is nearly universally used during a freestyle swimming

competition, hence freestyle is used metonymically for the front crawl. It is one of two long axis strokes, the other one being the backstroke. Unlike the backstroke, the butterfly stroke, and the breaststroke,

The front crawl has been in use since ancient times. There is an Egyptian bas relief piece dating to 2000 BCE showing it in use.

In the Western world, the front crawl was first seen in a swimming race held in 1844 in London, where it was swum by Native North Americans. The Anishinaabe Flying Gull and Tobacco easily defeated

all the British breaststroke swimmers. English gentlemen, however, considered this style, with its considerable splashing, to be barbarically “un-European” and the British continued to swim only the

Sometime between 1870 and 1890, John Arthur Trudgen learned the front crawl from native South Americans during a trip to Argentina (the exact date is disputed, but is most often given as 1873).

However, Trudgen mistakenly used (in Great Britain) the more common sidestroke (scissor) kick instead of the flutter kick used by the Native Americans. This hybrid stroke was called the Trudgen stroke.

Because of its speed, this stroke quickly became popular.

Trudgen’s style was improved by the Australian champion swimmer, Richmond “Dick” Cavill (1884–1938), the son of the swimming instructor, “Professor” Richard “Frederick” Cavill. While Richmond and

his brother “Tums” developed the stroke, they were later inspired by Alick Wickham, a young Solomon Islander who was living in Sydney. He swam a version of the crawl stroke that was popular in his

home island at Roviana lagoon. They modified their swimming stroke using this as inspiration and this modified Trudgen stroke became known as the “Australian crawl”.

The American swimmer Charles Daniels made modifications to a six-beat kick, thereby creating the “American crawl”. With minor modifications, this stroke is the front crawl that is used today.
Technique

The starting position for front crawl is known as the “streamline” position. The swimmer starts on the stomach with both arms stretched out to the front and both legs extended to the back.
Arm movement

The arm movements of the front crawl provide most of the forward motion. The arms alternate from side to side, so while one arm is pulling and pushing under the water, the other arm is recovering above

the water. The move can be separated into four parts: the downsweep, the insweep, the upsweep, and the recovery.[9] Each complete arm movement is referred to as a stroke; one stroke with each arm

From the initial position, the arm sinks slightly lower and the palm of the hand turns 45 degrees with the thumb side of the palm towards the bottom, to catch the water and prepare for the pull. The pull

movement follows a semicircle, with the elbow higher than the hand, and the hand pointing towards the body center and downward. The semicircle ends in front of the chest at the beginning of the

This pull and push is also known as the S-curve.

Some time after the beginning of the pull, the other arm begins its recovery. The recovery moves the elbow in a semicircle in a vertical plane in the swimming direction. The lower arm and the hand are

completely relaxed and hang down from the elbow close to the water surface and close to the swimmer’s body. The beginning of the recovery looks similar to pulling the hand out of the back pocket of a

pair of pants, with the small finger upwards. Further into the recovery phase, the hand movement has been compared to pulling up a center zip on a wetsuit. The recovering hand moves forward, with the

fingers trailing downward, just above the surface of the water. In the middle of the recovery one shoulder is rotated forward into the air while the other is pointing backwards to avoid drag due to the large

frontal area which at this specific time is not covered by the arm. To rotate the shoulder, some twist their torso while others also rotate everything down to their feet.

Beginners often make the mistake of not relaxing the arm during the recovery and of moving the hand too high and too far away from the body, in some cases even higher than the elbow. In these cases,

drag and incidental muscle effort is increased at the expense of speed. Beginners often forget to use their shoulders to let the hand enter as far forward as possible. Some say the hand should enter the

water thumb first, reducing drag through possible turbulence, others say the middle finger is first with the hand precisely bent down, giving thrust right from the start. At the beginning of the pull, the hand

There are several kicks that can be used with the upper body action of the front crawl. Because the front crawl is most commonly used in freestyle competitions, all of these kicks are legal.

The most usual leg movement with the front crawl is called the flutter kick. The legs move alternately, with one leg kicking downward while the other leg moves upward. While the legs provide only a

small part of the overall speed, they are important to stabilize the body position. This lack of balance is apparent when using a pull buoy to neutralize the leg action.

The leg in the initial position bends very slightly at the knees, and then kicks the lower leg and the foot downwards similar to kicking a football. The legs may be bent inward (or occasionally outward)

slightly. After the kick, the straight leg moves back up. A frequent mistake of beginners is to bend the legs too much or to kick too much out of the water.

Ideally, there are 6 kicks per cycle (the stroke so performed is called the American crawl), although it is also possible to use 8, 4, or even 2 kicks; Franziska van Almsick, for example, swam very

successfully with 4 kicks per cycle. When one arm is pushed down, the opposite leg needs to do a downward kick also, to fix the body orientation, because this happens shortly after the body rotation.

Using the whip kick (from the breaststroke) with front crawl arms is called the Trudgen (after its inventor, Englishman John Trudgen), or the racing stroke; this was the original form of the front crawl and

can still sometimes be seen. It is a difficult stroke to master, as the breathing pattern for front crawl needs a rotation, and a breaststroke kick resists this rotation. It is also possible to employ a dolphin

kick, as used in the butterfly stroke; although this reduces the stability of the swimming position, it has been used by swimmers Michael Klim and Alex Popov at the Olympic Games.
Breathing

Normally, the face is in the water during front crawl with eyes looking at the lower part of the wall in front of the pool, with the waterline between the brow line and the hairline. Breaths are taken through

the mouth by turning the head to the side of a recovering arm at the beginning of the recovery, and breathing in the triangle between the upper arm, lower arm, and the waterline. The swimmer’s forward

movement will cause a bow wave with a trough in the water surface near the ears. After turning the head, a breath can be taken in this trough without the need to move the mouth above the average water

surface. A thin film of water running down the head can be blown away just before the intake. The head is rotated back at the end of the recovery and points down and forward again when the recovered

hand enters the water. The swimmer breathes out through mouth and nose until the next breath. Breathing out through the nose may help to prevent water from entering the nose. Swimmers with allergies

exacerbated by time in the pool should not expect exhaling through the nose to completely prevent intranasal irritation.

breathing always to the same side. Most competition swimmers will breathe every other stroke, or once a cycle, to a preferred side. However some swimmers can breathe comfortably to both sides.

Sprinters will often breathe a predetermined number of times in an entire race. Elite sprinters will breathe once or even no times during a fifty metre race[citation needed]. For a one hundred metre race

water completely for better visibility and easier breathing, at the price of a much steeper body position and higher drag.
Body movement

push to leave the water.

Side-to-side movement is kept to a minimum: one of the main functions of the leg kick is to maintain the line of the body.

Sorry, the comment form is closed at this time.